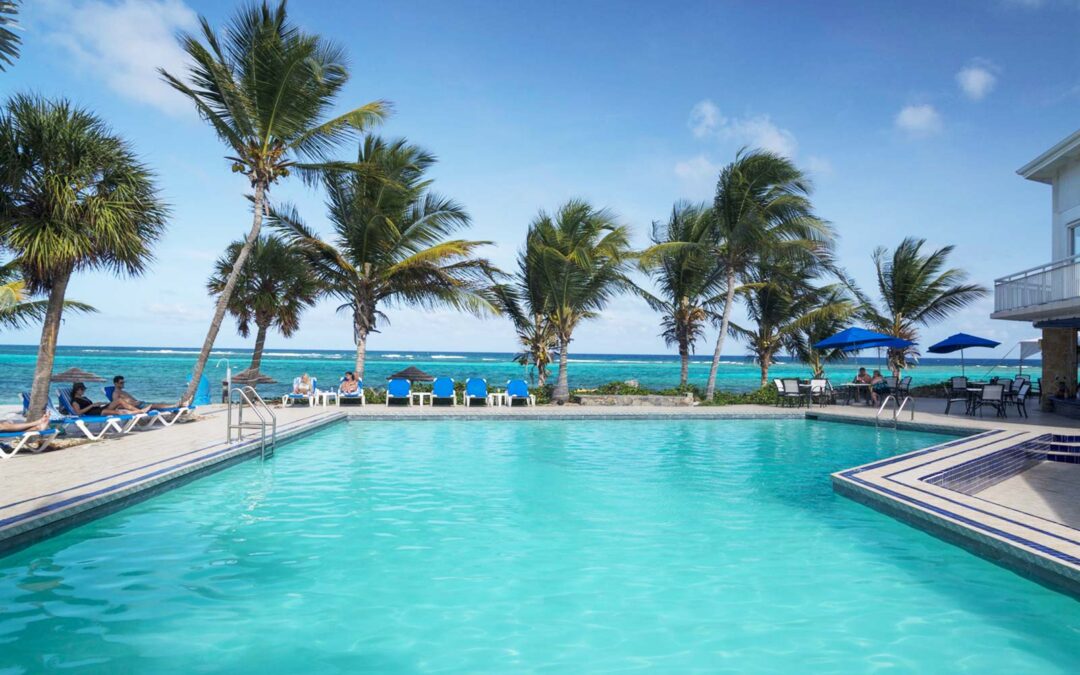 That hotel has been shut down for 4 years since Hurricane Maria and we get a lot of questions about when that’s going to re-open. We are so happy to seeing the relaunch in October! According to their September announcement on Facebook, the resort will be a room-only resort until February 1, 2022, and with the all-inclusive program on the horizon. See the resort website for details.

Named as one of Travel & Leisure’s Best All-inclusive Resorts in the U.S. Virgin Islands recently, the Divi Carina Beach Resort and Casino will be fully relaunched as an all inclusive, adults only resort with 200 rooms. The resort has redesigned rooms and suites and also includes an on-site casino, a restaurant and bar for late-night options. Amenities will include non-motorized watersports, a mini-golf course, tennis and pickleball and a 24-hour fitness center, along with two freshwater pools. Read more in the Caribbean Journal. 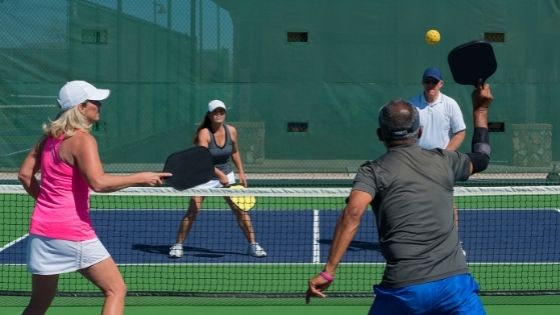 Pickleball is a sport that combines tennis, badminton, and ping-pong all in one, and it’s growing in popularity in the US Virgin Islands!

The St. Croix Pickleball Committee thinks the sport gained traction in the territory about 2 years ago and has been organizing tournaments at different times in a year. The recent tournament on August 21st had 12 teams competing head-to-head for prizes and medals. The event was great outdoor fun for the participants and for the spectators who came out to support the event. Anyone interested in learning how to play pickleball or in donating towards improving the pickleball courts can contact Linda Midlikowski at 340-473-0215 (read the full article on St. Croix Source).

According to the USA Pickleball Association, pickleball has had a 650 percent increase in numbers over the last six years with the largest growth not necessarily in the over 60 age range. Created in 1965 near Seattle, pickleball was named after pickle boats, the thrown-together crew that sometimes competes in rowing. The sport has been popular for about 20 years in Florida and other places with large numbers of retirees. Currently, there are many municipalities and parks and recreation departments that are setting up courts, making it accessible to a younger crowd according to NBC News. 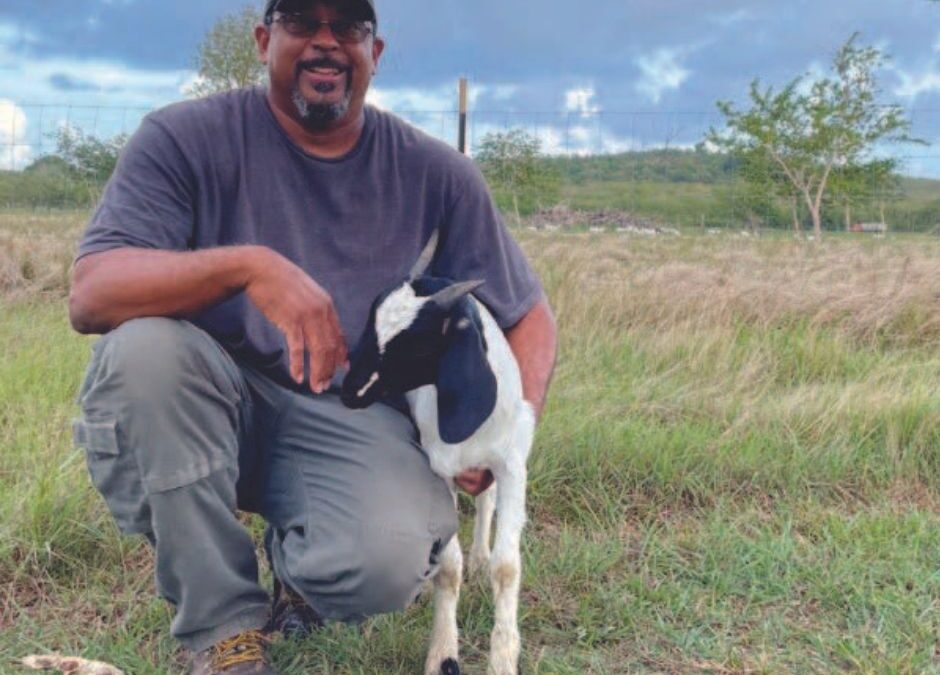 There’s no denying that the heart and soul of the Virgin Islands lies in the territory’s robust agriculture. With its rich, premium soil and its proximity to the equator, this combination creates a unique taste and texture in produce that surpasses the flavor of food grown on the United States mainland. St. Croix, an island once known as the “Breadbasket of the Caribbean,” has continued to make strides to eliminating food insecurity on the island with recent support from World Central Kitchen’s (WCK) Food Producer Network (FPN).

FPN was established in Puerto Rico 2018 in response to the devastating hurricane season the year prior. To date, $3.7 million in grants have been disbursed to over 200 food producers affected by natural disasters in the Caribbean and Central America. In 2020, WCK expanded the program to the Virgin Islands to support the farmers, fishers and food-related small businesses that suffered catastrophic losses after Hurricanes Irma and María. FPN helps to strengthen food security and sustain economic development throughout the territory’s food producing communities for many years to come.

Mikol Hoffman, Director of WCK’s Food Producer Network, shared his vision on how the program benefits the USVI. “We have seen through collected data that program participants increase their sales and production by over 50% after one year in the Network,” said Hoffman. FPN also works to connect its partners to each other and bring together a vibrant community of food producers who now actively collaborate through new production and distribution partnerships. This results in greater reach and increased market presence. “Through these efforts, program participants can become stronger as a whole than as individual food system operators and increase their productive resilience against future disasters.”

To date, WCK has invested over $300,000 through 20 grants across the Virgin Islands, with an average grant size of $15,000. Their latest round of funding invested $78,000 through five grants to food producers on St. Croix and St. Thomas including Concordia Farm, Crescent Farms, Kallaloo Farms, LLC and Mystical Farms on St. Croix and Tropical Pops Popsicles on St. Thomas. 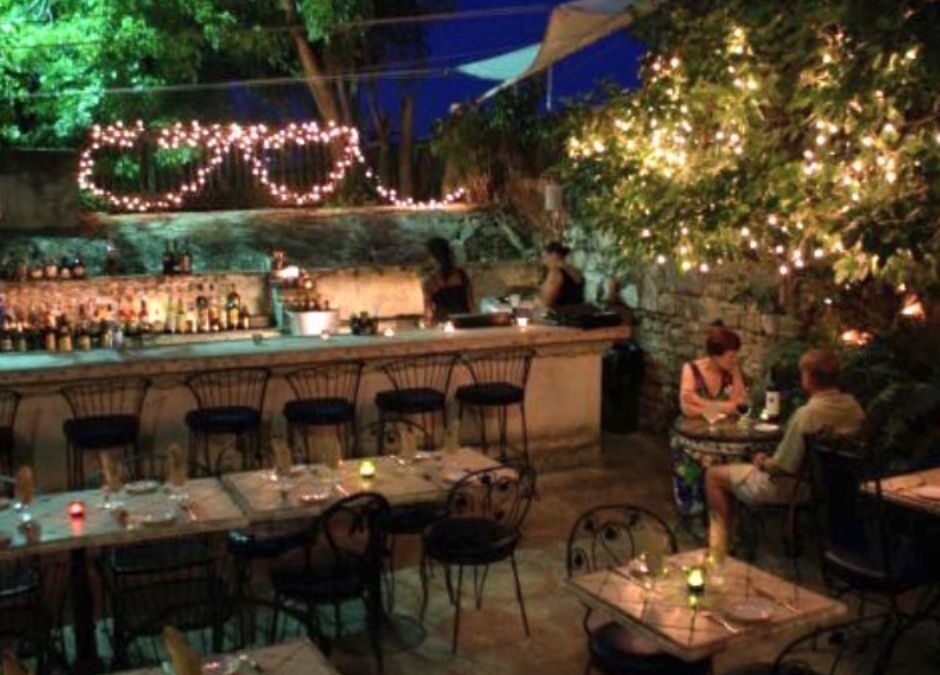 Since 1998, Savant has delivered on its promise of providing fresh, flavorful and creative cuisine to residents and visitors of St. Croix. Owner Tom Miller recalls the soft opening on the September night of the Christiansted Jump Up festival saying, “we’ve kept it a soft opening ever since!”

What has kept Savant going for so long is their ability to learn from the past and implement new ways of getting better and better with each dinner service. “We spend so much time at the restaurant that you make it somewhat like your living space, like you’re at home,” said Miller. That warm, welcoming ambiance combined with their fresh and flavorful dishes is a large part of the reason why guests continue to return to Savant to celebrate birthdays, anniversaries or even to pop the BIG question! “Great, friendly service, great food and the vibe of Savant is one of the enduring things that transcends everything.”

One of the most unique features of Savant is the two dining experiences in one location. Guests can choose to enjoy dinner in the outdoor courtyard which has a romantic, Old World feel or they can opt for the intimate, sophisticated atmosphere of their air conditioned indoor dining room. Both options offer the same menu that features iconic house favorites like the char-grilled baby calamari, the portobello and goat cheese Stuffed Filet and their Bacon Wrapped Double Cut Pork Chop. Nightly one-of-a-kind specials are whipped up by Executive Chef Darryl Hanna and his kitchen staff. Miller regularly encourages his kitchen to be creative with the nightly specials board as it’s their time to really flex their culinary muscles. Hanna started his culinary journey at Savant ten years ago and has been one of Miller’s favorite chefs. His mellow personality easily fits in with the restaurant’s vibe and in a way, shows how the establishment has come full circle. “He’s more like family than anything else, getting us back to where we were before with some classic things we used to do in the beginning and some new things as well.”

Savant is open Monday through Saturday from 6pm to 10pm. For more information, visit their website at www.savantstx.com or call them at 340.713.8666 to make a reservation. 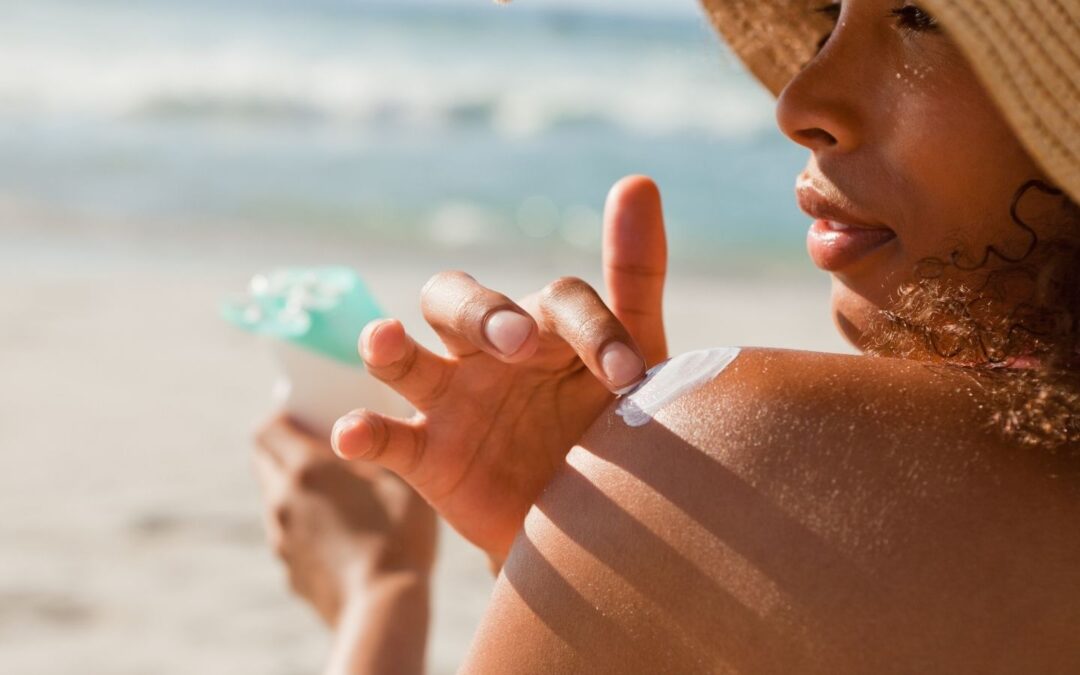 The Toxic 3 O’s in Sunscreen

This US Virgin Islands — St. Croix, St. John and St. Thomas — has lush green hillsides and beautiful beaches surrounded by colorful coral reefs. According to the Nature Conservancy, coral reefs in the Virgin Islands are essential for a healthy ocean, thriving economies and prosperous communities.

St. John non-profit Island Green Living Association and a coalition of environmental groups, community leaders, academics and businesses are leading an effort to raise awareness of the harmful impact of oxybenzone, octinoxate and octocrylene, which are commonly found in chemical sunscreens. They have filed a petition to the FDA for the removal of sunscreen products containing ‘the Toxic 3 Os’. The coalition argues that if that screen contains one of ‘the Toxic 3 Os,’ it could contribute to the failing health of Caribbean coral reefs. The petition is signed by a retired scientist and industry toxicologist, senators, and organizational leaders as reported by the St. Croix Source. It also reports that the U.S. Virgin Islands and Hawaii are especially vulnerable to the environmental impact of contaminants on coral reefs and both have laws on the books banning toxic sunscreen. Read more here.

If you are interested in learning simple ways to help save coral reefs and the fish, animals and plants that depend on them, read more here. 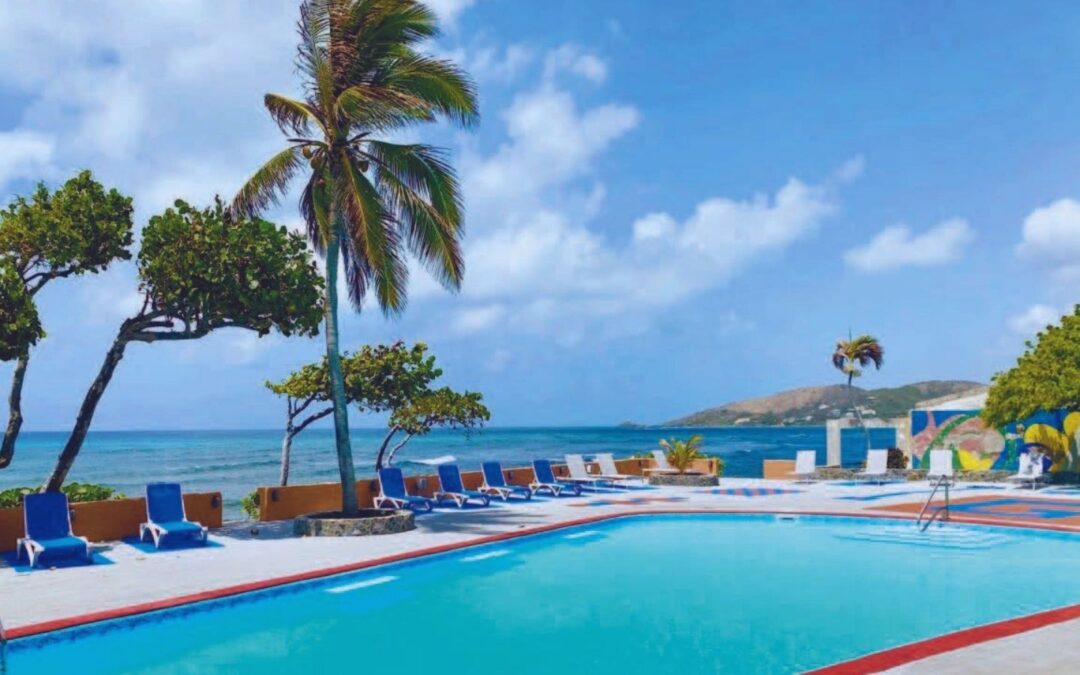 A renowned St. Croix hotel returns! Thirty-two years after Hurricane Hugo ravaged St. Croix, an iconic hotel has returned to its former space after its doors were shuttered due to the catastrophic 1989 storm. Grapetree Bay Hotel & Villas is located on St. Croix’s East End across the bay from the Divi Carina Bay Resort & Casino. Once heralded as the most sought out hotel in the late 1960s, the widespread 45-acre property was purchased by an investment group with the project being led by one of its members, Josh Sayre. Originally from California, Sayre is an established construction manager with extensive experience in remodeling dilapidated homes and buildings. His work on island includes low-income homes built for VI Housing Finance Authority as well as a few private homes for sale. He decided to take on the hotel rebuild but knew it would require his constant presence on island. He moved to St. Croix full time to spearhead the project.

This massive undertaking required Sayre and his team of local professionals to completely overhaul the damaged property with poured concrete walls, reinforcing the structure that was left. “There was too much concrete to completely tear down the building,” said Sayre. It took two years for the main building to be complete. It features 18 guest rooms, the hotel pool plus the property’s Sea Terrace Restaurant. After renovation is fully completed, there will be 56 rooms and another restaurant on the property. The restaurant and pool officially opened to the public on August 7, 2021. Head Chef Brittany Middleton is leading the way in the kitchen with a solid team preparing a diverse selection of appetizers and sandwiches featuring locally sourced produce, house made breads, croissants and desserts. Originally, Middleton was hired as a line chef and was later promoted to head chef. The restaurant is currently open for lunch on Saturdays and Sundays only from 11am to 3pm. A few brunch options will be added to the current menu in September with fine dining in the evenings slated to be added soon.

Sayre and his wife currently serve as general manager, restaurant manager, expediters, bartenders, wait staff and everything else in between as they ramp up their hiring efforts in anticipation of the hotel’s opening in late 2021. Guests can request reservations by emailing grapetreehotel@gmail.com for inquiries on current availability. For more information, visit their Facebook page at https://www.facebook.com/grapetreebayhotel.